America, circa 1950: World War 2 has been over for five years, but the economy that received a jump start from it is still going strong.  Recently discharged G.I.s and high school grads are finding work in bunches at factories, fledging corporations and local businesses. In turn, they get married and relocate to the slew of suburban “Levittowns” that are popping up all over the United States.  Soon they two kids and a nice car parked in the driveway of their home surrounded by a white picket fence.  Their jobs earn them enough to save for family vacations and live a comfortable life for themselves as the new middle class.  This was then known as the American Dream, where anyone could attain it with a little bit of hard work and drive.

Fast forward to 2011: we’re involved in two costly wars during an unstable economy with unemployment rates that hasn’t been seen since the Great Depression.  College graduates are having a difficult time finding jobs.  There are a record number of home foreclosures due to families not being able to afford them as the housing market bubble burst, with some people just abandoning their homes.  People are struggling to pay the escalating fuel prices to fill up their gas guzzling SUVs, in which many work two or more jobs just to make ends meet.

So what happened to the American Dream? 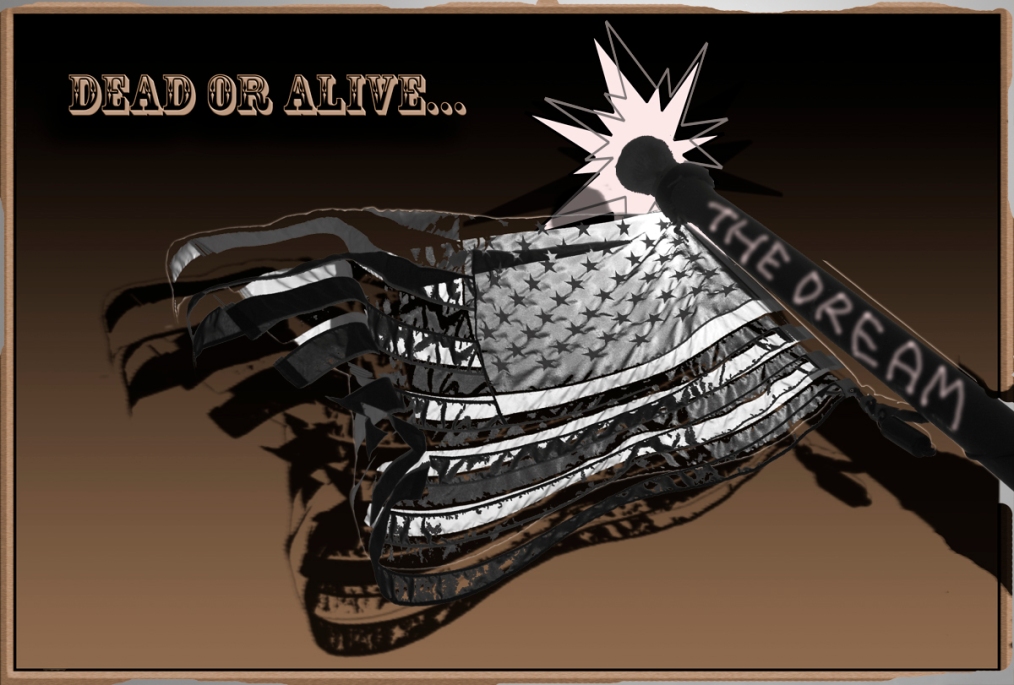 It all depends on who you ask.  A bartender will tell you the Dream was killed by government entitlements and corporate greed, while a barfly will say from our own apathy, while yet another says it never did exist, but his buddy says it does.  Truth is it depends on what your version of the American Dream is.

While the American Dream has gone over different meanings over the years, the version that most people identify with was defined in 1931 by historian James Truslow Adams in his book Epic of America as, “…life should be better and richer and fuller for everyone, with opportunity for each according to ability or achievement”.  In other words, with hard work and dedication, you can achieve prosperity and success.  That version of the American Dream is dead and not attainable for many in today’s climate but to only a few, but that does not say that the Dream doesn’t remain in the hearts of Americans in some way.

Ask around, most people will say they believe that the American Dream is alive and well, but in various forms pending on the individual.  Some see the Dream more about “spiritual happiness than material goods” as a 2010 Zogby poll noted, and others may see it differently still.  Whatever the case may be, the American Dream does live on, but on more of a personal level rather than a universally accepted concept.  This I can attest to…

Born having a creative, adventurous soul but with no outlet or life to nurture it living in a dying, run down city, my prospects of succeeding on any front were not good.  I ended up working menial jobs that never satisfied my passion for art, just to make a few bucks and nothing else. The idea of this acceptance of living was hammered into my consciousness by my parents and the town I live in: Fall River.  This gnawed at me as the years wore on.  There were spurts of possibility as I received a degree from community college and also moving around the country for a little while, but my passions for photography and exploring was still being stifled and not nurtured.  In essence, I was not living but existing.

It wasn’t until recently in my early forties when I decided enough was enough and I would make that plunge to live the life I wanted, whether I succeeded or not, for richer or poorer.  The money I was earning as a theater technician, decent as it was, was not making me happy and the lifestyle that came with the job was killing my soul.  It was then I made the difficult decision to quit my well-paying, but very dissatisfying job and finally get that BFA in photography I always wanted.

A year later I am happy to say that was the best decision I have ever made in my life as I am now entering my senior year at the University of Massachusetts Dartmouth and flourishing as a photographer and fledging writer.  My income is a mere pittance of what it once was, but I could not be happier with the way things are turning out for me in my life.  It hasn’t been easy as sacrifices were made, but I had the courage to make them and it is paying off in ways I could not have imagined before.

So you see, in my own way, I feel that I am achieving the American Dream as I am free and able to choose the life I want to lead and be happy living it. What people find difficult is that achieving the Dream comes with hard work, dedication and sacrifice, and some today find it hard to part with familiarity and comfort for the sake of making the necessary changes in their lives.  With courage and perseverance, you can overcome anything as I have experienced.

I don’t equate the American Dream with wealth and prosperity as I do with happiness and fulfillment, whether those concepts bring prosperity or not it doesn’t really matter.  What matters is that I live the life I love and that’s all I could ask for, but my dream may not be the same as yours and that’s ok.

Who’s to say what exactly the American Dream is?  We all have our own perceptions of what it might be, so take it as your own and fulfill your dream, whatever that may be, no matter how big or how small.  It’s yours and yours alone to fulfill, for this is America – where anything is possible.

Fall River: A ...
By Michael Smith